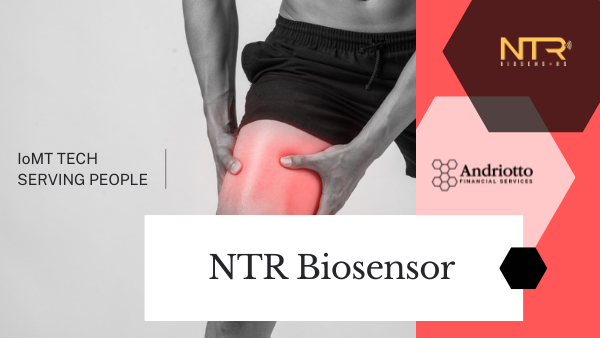 The idea behind NTR BIOSENSORS was born from a personal experience of the entrepreneurial team: new technologies to rehabilitate and reduce the danger of new injuries.

An idea born from patients, for patients.

NTR BIOSENSORS introduces dynamic load monitoring applied to the injured limb. Our aim is to avoid post trauma injuries related to overloading and allow a total return on their habits!

IoMT (Internet of Medical Things) technology is the new frontier of the highly digitized, interconnected and efficient healthcare sector.

Wearable Device entirely conceived, designed and tested in Italy by a team of professionals.

The use of wearable technologies is constantly growing. In 2020 alone, more than 440 million were shipped worldwide with an expected market value for wearables in the medical sector of over 16 billion dollars by 2022 (from the website).

Designed for the patient

The NTR system named “ORME” is designed for the patient, by the patient. Rehabilitation for everyone.

Develop with advanced methodologies and technologies, systems and solutions to reduce the risk of relapse.

Insight:
what is the problem?

NTR Biosensors and the ORME project were born as a result of a real case that occurred in the entrepreneurial team, an accident on the skis that led to the fracture of the tibial plateau and a consequent surgical intervention with a metal implant. At the time of discharge, th

e doctors instructed the patient to load little weight on the operated limb, ideally resting about 10kg and increasing progressively in the following months up to 100% of body weight.

How could the task be accomplished with precision?

The memory of a movement is not reliable, moreover, there is no feedback of what a patient is doing, since the mechanical scale that rehabilitators suggested to adopt as a setting tool is used only once and the “weight” informati

on is not repeated in the rest of the day. Speaking with the orthopedists and primaries of some of the main hospitals in Lombardy it also emerged that the problem of loading is a widespread issue: a percentage that fluctuates between 20% and 30% of interventions for fractures to the tibial plateau is re-performed due to the rupture of metal implants following the overload of patients. Clearly, it is difficult to maintain the loads indicated by the rehabilitators without any type of active feedback – as can also be found in the scientific reports.

In addition to obvious inconveniences for patients, the issue is also expensive for the national health system, as each surgical operation on the lower limbs have average costs of around € 6,000 and may exceed € 10,000 in cases of metal or prosthetic implants.

Insight:
what is the solution?

A solution that reduces the risk of complications and relapses due to the problem of overload on injured limbs has the double advantage of facilitating the patient’s life in the immediate post-operative or post-trauma period and of allowing the national health system a potential saving of tens of millions of euros linked to corrective interventions.

ORME is the solution of NTR Biosensors that is based on the integration of hardware and software elements with the aim of monitoring patient activity and transmitting feedback in real time in case of overload detection.

Thanks to a wearable consisting of a sensorized insole, control electronics and a mobile app, the patient is able to recognize every moment in which he loads excessive weight on the operated limb.

In addition, following a real-time sound and haptic feedback returned by the smartphone, it is able to correct the pace so as not to excessively strain the compromised limb and, consequently, decrease the risk of new injuries.

Even the doctor and/or physiotherapist are equipped with a SaaS software through which they can remotely monitor their patients and possibly modify the recovery plan in case of complications that have emerged.

The decrease in the risk of injuries due to overload can improve the quality of the patient’s recovery, the remote-control software helps the professional during the monitoring and analysis of their patients even when they are not in the clinic, and the reduction of correction interventions due to overload allows a considerable saving to the national health system.

In order to facilitate the market entry, NTR Biosensor has recently launched a capital campaign!

Who believes in this project?
Meet the TEAM:

Graduated in International Relations at the University of Milan. After a year of experience in a Swiss company where she dealt with the management of foreign companies, she joined 3i Partners as a PM and later became a Managing Partner. The role she holds within 3i Partners has contributed to the acquisition of important knowledge in the world of industry 4.0 and in the management of R&D projects, an activity that is fundamental within NTR Biosensors. In addition to managerial and operational activities, she is also in charge of administration and personnel management within the start-up.

Graduated in Electronic Engineering with a specialization in Bioengineering at the “Politecnico di Milano”. After various experiences as a clerk in large companies and an MBA at Bocconi University, he began his career as an entrepreneur in various sectors, including IT, computer science and pharmaceuticals. He is currently Professor at Bicocca University and Senior Partner of 3i Partners, a consulting company he founded. He is the main creator of NTR Biosensors products, where he holds the role of manager of technological activities and prototype development, as well as the definition of go-to-market strategies and commercial coordination.

Graduated in Physical Engineering at the “Politecnico di Milano” and, after an MSc in International Business at the Hult International Business School, he entered the world of consulting in the financial services sector. The first experience as a project manager within a large Italian company, from October 2018 to March 2020, allowed him to develop important skills in the organization of resources and in the management of projects in the field of digital transformation and online services. Since March 2020 he has been engaged as a strategic consultant in one of the most important consulting companies in the world, famous for the management of projects with high technological and innovative content.

Graduated in Business Administration at the University of Pisa and later obtained an MSc in International Business at the Hult Business School in London. He worked as a consultant for 3i Partners where he has gained skills in R&D project management and strategic consulting. Since 2021, within NTR Biosensors deals with the coordination between internal and external activities with third-party suppliers, as well as the definition of the go-to-market strategy and management of R&D activities.

After a Master’s Degree in Physics obtained with academic experience both in Italy and abroad, he was responsible for following and bringing a new product from the conception phase to its production on an industrial scale in an Italian startup, gaining skills in the fields of research and development and acquiring skills for the development of innovative ideas, to improve the products offered by the company and create new ones. From simple intuitions he carried out feasibility tests and developed a new technology with patent filing. Within NTR Biosensors he brings his ability to realize ideas in working prototypes and improve existing solutions from a technological and functional point of view. He is responsible for laboratory and testing activities for the improvement of sensors and electronics performance.