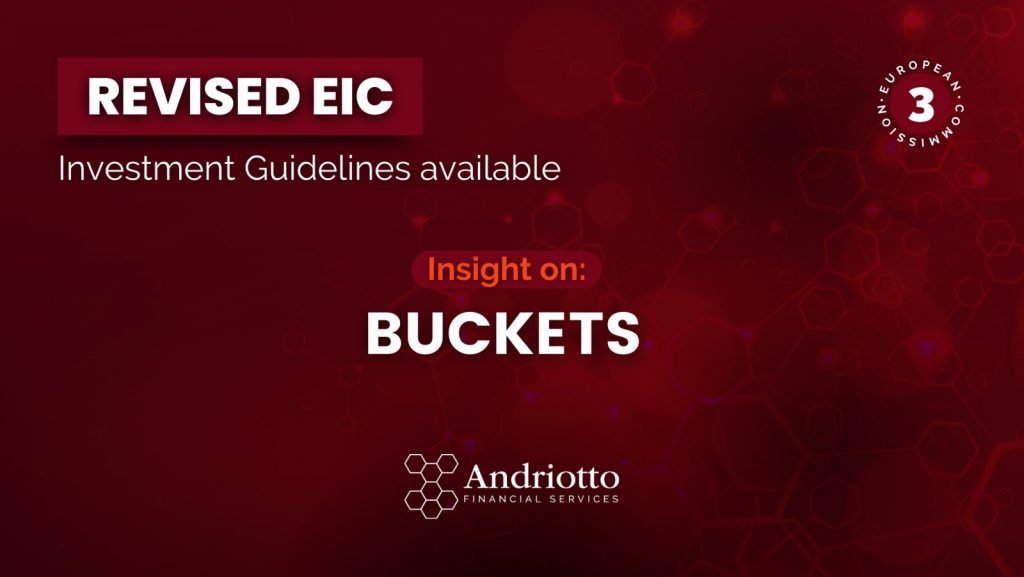 The Investment Guidelines have been updated to provide more clarity to applicants and to reflect recent changes in the management of the EIC Fund and will remain in place until the end of 2022.

Check out our previous article about the “types of innovation” here:

Check out our previous article about the “charateristichs of investments” here:

In the next articles, we would like to introduce some of the main points discussed in the document that might be of interest for any project that needs investors.

Insight on on the so-called:

There are several financing methods that the European Commission refers to, among those, there are the so-called “buckets.” It’s basically a way to determine how a project should be financed.

As reported in the document,

If the company and the EIC Fund consent to the proposed co-investment opportunity, financial and commercial due diligence and negotiations may then be performed jointly and in agreement with the potential coinvestor(s), however under control of the Fund to ensure sufficient due diligence and implementation of required conditions to be included in the investment documentation.

Following an initial assessment implying some level of due diligence, including KYC compliance checks (led by the EIC Fund), and market consultation (led by the Investment Advisor), a transactions’ categorization will be done into the 4 “buckets” presented below. This classification will not be static, as cases may be moved from one bucket to the other as the due diligence process evolves, based on its findings, or on the initiation of co-investment interest – resulting interalia from the de-risking operated by the EIC Accelerator support, or at later stage as the project evolves and milestones are reached.

There are 3 main “buckets”, divided as followed:

Bucket 0 will include cases for which initial assessment or due diligence, at any stage, reports substantial negative issues preventing any investment.

The EIC Fund’s due diligence is as it goes a more specific and accurate examination of an operation, meaning that the purpose is to its investment component, findings may lead to question the legality or the rationale of the operation.

If one of more of the conditions below are encountered, the EIC Fund will recommend to the EC to reject the investment – a decision that may lead the EC to gather a jury of external independent experts to reevaluate the proposal, but in other cases also terminate or even cancel the already concluded EIC Accelerator contract depending on the case (as reported in the official document):

Bucket 1: when companies are non-investment ready yet

Bucket 1 will include cases that are not investor ready for regular investors yet, due to remaining very high risk despite the awarded EIC Accelerator support.

It is recognized that the project has a distinct potential, but it’s not fully developed yet and still needs improvements on some level – or several.

The lack of immediate interest may result from various shortcomings: very early stage of the underlying technology, a too long planned time to market, a too small market compared to the investment needed etc.

These are three types of cases are envisaged (as reported in the official document):

Bucket 2 will include cases where potential investors show immediate interest in co-investing into EIC selected companies.

In order to safeguard EU interest as an alternative to take a blocking minority on their own, the EIC Fund will discuss an agreement with other shareholders; while, on behalf of the EIC Fund, the Investment Advisor – who can assume the role of a consulter or mentor – will negotiate the terms with potential co-investors, including possible mentoring tasks.